I have particular tastes. Also, I’m kind of a jerk. Keep this in mind. Just, you know. In life. Words to live by.

I review a ton of stuff on here, and it all gets between 0 and 5 scoops of delicious, delicious ice cream. Although 0 scoops would be the worst, it’s not likely to ever actually happen. I don’t think I’ve given anything a zero. 5 is also not terribly likely, although it does happen.

The moral of the story is, this isn’t a mathetmatical rating system. You’d imagine, if I were a normal person, that a scoop would translate into a certain percentage. If anything I ever did made sense, this would be reasonable. But I am not reasonable and I do not make sense.

In general terms, 3 scoops is pretty good. Most stuff gets in the 3 to 3.5 range. If it’s a 3 or more, it’s worth watching, reading or playing. 4 is really good. Below 3, view/play/read at your own risk. Here’s a handy visual that also shows off my formidable MS Paint skillz: 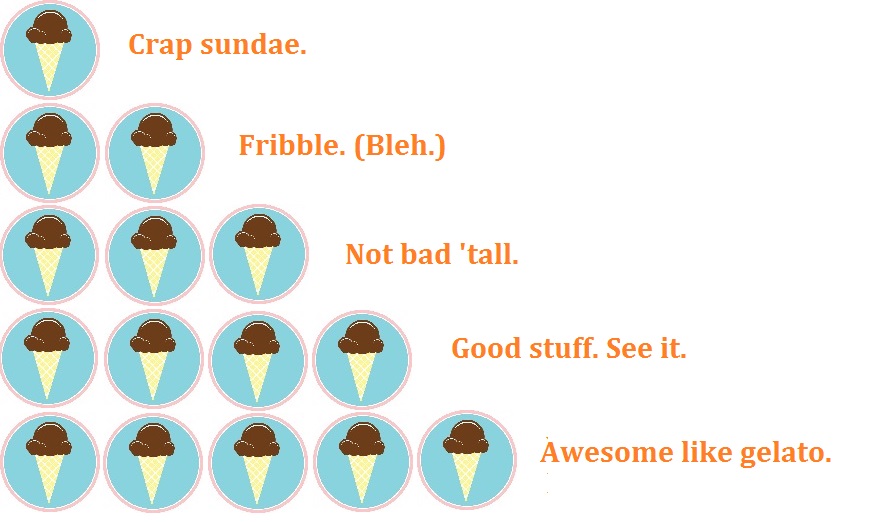 While I try to be consistent, my ratings often come down to how much I enjoyed a movie on a particular viewing. So I might be able to acknowledge that a movie is a “good” movie, for example, but still give it 2 scoops because I just didn’t enjoy it. Or I may recognize that a movie falls short of expectations, but I still had some fun with it–in which case it may get a higher rating than it seems to merit. It’s great to be aware of cinematic conventions and to appreciate artistry and technique in film, or gameplay mechanics and level design in video games, or whatever; but at the end of the day enjoyment is still the most important part of all of these media.