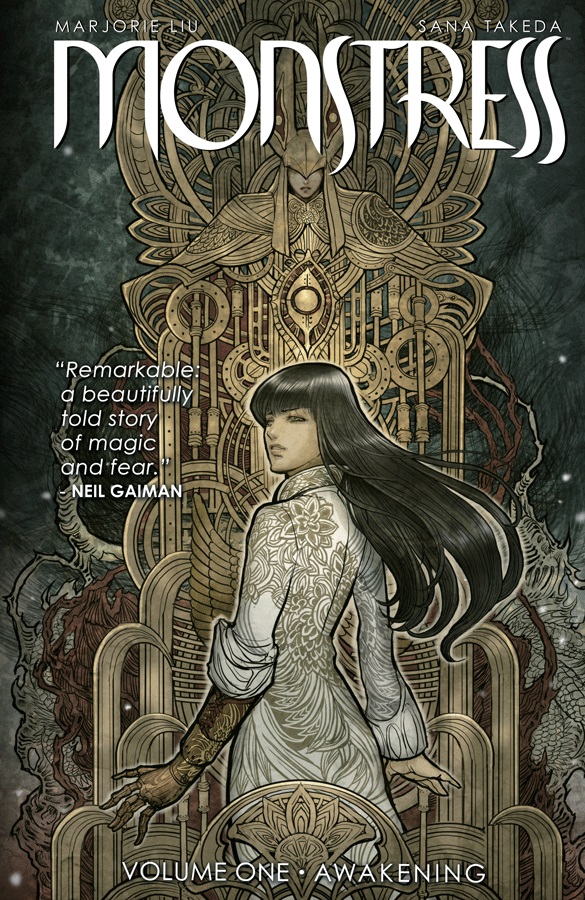 Monstress, written by Marjorie Liu and illustrated by Sana Takeda, is pretty brilliant. The story follows Maika, a grouchy, one-armed young girl struggling to exact revenge on a fanatical religious order. Maika lives in a strange world where humans coexist, not harmoniously, with Arcanics, beings with a wide variety of seemingly monstrous and magical attributes. There is an uneasy, temporary truce between the races, who have until recently been locked in war, and Maika’s quest for vengeance (or at least murder) occurs in a setting dripping with fantasy racism, with many Arcanics sold into slavery and for use as raw materials in the production of a magical serum called Lilium.

The story is exciting, violent and dark. While Maika is the protagonist, it isn’t always easy to sympathize with her–though this changes, appropriately, as we learn more about her. She is the host to a demonic entity which sometimes takes control of her body, granting her immense strength and psychic abilities, and the collateral damage this demon causes is troubling, to say the least. The moral ambiguity adds an additional layer of complexity to an already intricate story.

In this world women are dominant, with only a very small number of men even appearing in the narrative. And even among humans, generally the less powerful of this universe’s races, women may have some psychic abilities. (Men, apparently, lack these abilities, for reasons not yet spelled out.) Everything has an Asian veneer (Image’s own description says it’s set “in an alternate matriarchal 1900’s Asia”), and there are airships and talking cats and people with animal faces and/or tails enough to satisfy all your Final Fantasy needs.

But by far my favorite aspect of Monstress is Sana Takeda’s illustrations, which are absolutely stunning, with character designs in a familiar Japanese manga style paired with backgrounds and coloring more closely akin to contemporary Western comics. (Takeda apparently worked on several Marvel comics in the past, though this is my first time encountering her work.) The first volume is worth purchasing for her artwork alone, to say nothing of the great story.

This first trade paperback collects issues 1 through 6, and I can’t wait to read more.