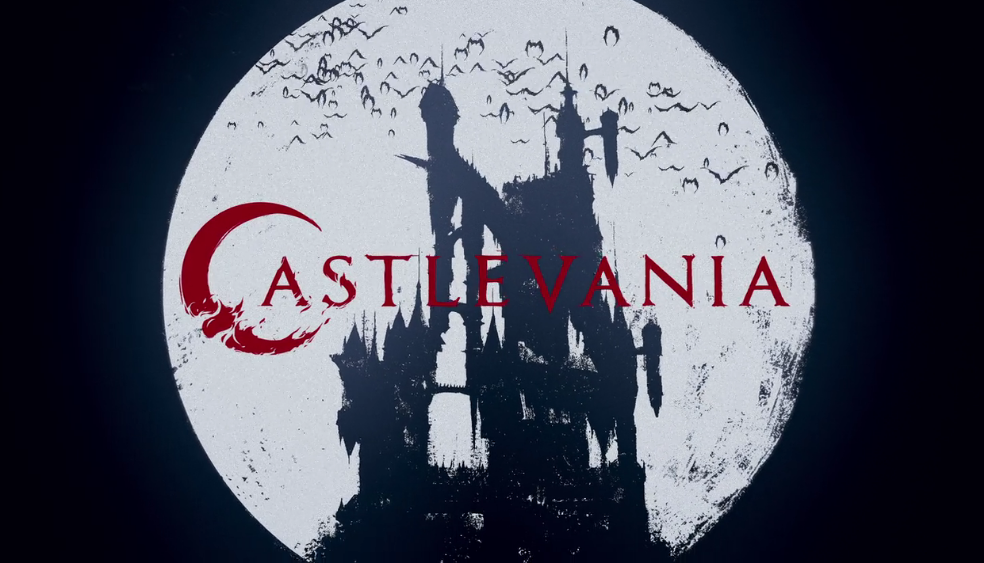 Dear readers, you may have heard, long, long ago, the tale of the fearless basement monster hunters. You may have heard the whispers of bullwhips and laser guns blasting in the Stygian gloom, or of hours spent clutching a tiny glowing box for the good of all humanity. Most importantly, you may have heard of a new generation of hunters, and how they helped your Furious Academic make the bad life decisions that led to his meteoric rise in the mythical land of Angry People Writing About Dumb Things.

Put another way, you have surely deduced by now that I am an irredeemable dork who has been obsessed with Castlevania for more than a quarter of a century.

Over the years there have been many iterations of Castlevania, beginning with the NES and moving all the way up through the previous generation of game consoles. To my knowledge there’s only been one film adaptation, though I wouldn’t be surprised if there are anime one-offs floating around. MercurySteam’s short-lived gritty Western reboot of the franchise tried to take it in a new direction, and all things considered did admirably well; but since the last of those games was released in 2014, the franchise has been essentially silent.

Three years and more without a peep. Which is why it was so crazy when Netflix announced its new animated Castlevania series. What’s even crazier is that they have returned to the series’ 8- and 16-bit roots, and they seem to have gotten the lore right. They even refer (constantly) to the setting as Wallachia, not Transylvania. 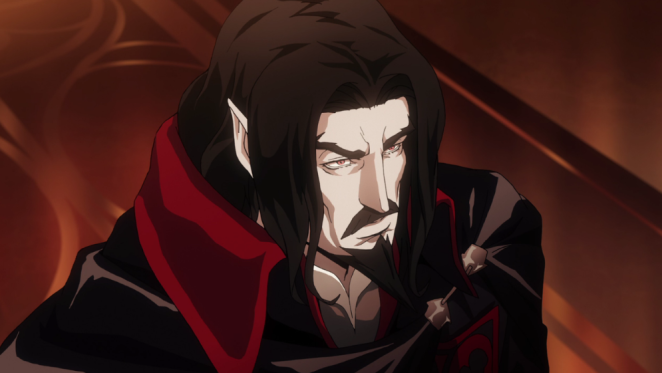 They got Dracula right, too, down to the weird anime elf ears.

Castlevania’s first season tells the story of the original NES’ Castlevania III. (Which isn’t hard to do, given how the stories of the earliest games were all but nonexistent.) The hero is Trevor Belmont, who in this imagining is the last scion of the disgraced Belmont clan. This is Central Europe of the 15th century, dominated by religious zealotry and a crippling fear of supernatural powers and heresy. None of this ever made it into the earlier Castlevania games, but it makes a lot of sense to use this as the backdrop for a story in which the content of supposed “superstitions” turns out to be real. The season is only four episodes, and we don’t learn much of the Belmonts’ history or the nature of their powers as vampire hunters. There’s also a mad rush, in the first episode, to explain the reason for the season–i.e., Dracula–and his hatred for humans. This bit is, in my opinion, the least impressive of the first season. Happily, it’s also the least important. While Lisa, wife of Dracula, mother of Alucard, and tragic victim of churchish stupidity, is an interesting figure in Castlevania lore, she’s also far from central. We want whips and swords and demons, and the producers clearly know this, so they don’t keep us waiting too long.

Lisa is a precocious human who marches into Dracula’s castle–she doesn’t believe the stories about him–and demands that he teach her the secrets of science. Amused by her confidence, Dracula agrees, and they eventually marry. Obviously this golden era can’t last, though, and the Church intervenes, branding Lisa a witch and burning her at the stake. This is what prompts Dracula’s rage, and he unleashes an army of demons to plague Wallachia and eradicate the humans he views as ignorant vermin.

This is a handy way of explaining Dracula’s reappearance and the suddenness of his attacks, and it smoothly integrates the sparse stories of the original games into something broadly believable. The themes of ignorance and superstition are interesting here, again, in that the supernatural is real and dangerous. The Church emerges as the true villain, not for the content of its beliefs but its insistence on controlling the people. This conceit was never really explored in the original games, but I think it fits perfectly.

The character design is excellent, clearly modeled on Japanese animation, and the writing by Warren Ellis (!) is, with few exceptions, compelling–and often very funny. While there’s some goofy slapstick that I could have done without, Castlevania is extremely fun. Trevor is a drunken misanthrope who’s given up on the people his family have tried for centuries to help. (In this universe, the Church has branded the vampire-hunting Belmonts as black magic users and heretics, which makes a perverse kind of Dark Ages sense.) The first arc is largely about him coming back into his role as hero. Try not to cheer when he gives his “I am Trevor Belmont, of the House of Belmont, and dying has never frightened me” speech. 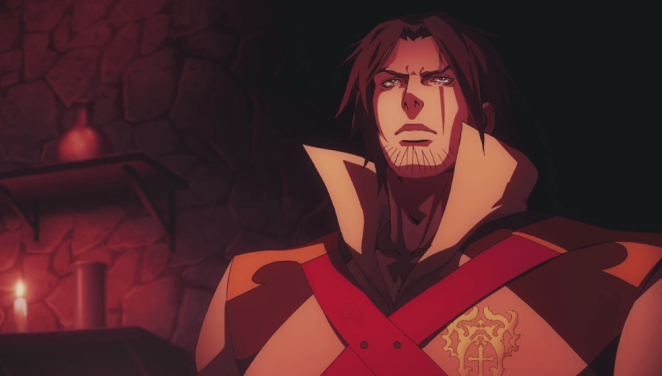 This first part of the story introduces fan favorites Alucard, the dhampir, and Sypha Belnades, the sorcerer (and Trevor’s eventual love interest). The only key character not included so far is Grant Danasty, the wall-crawling thief from Castlevania III, but there’s time yet for him to show up. The eventual meeting between Trevor and Alucard is suitably epic and my favorite scene so far. Also–and let’s be serious here– freaking ALUCARD. 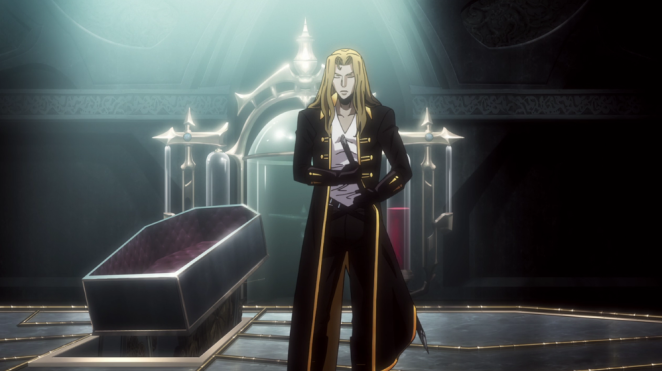 Some minor issues with pacing and crude humor notwithstanding, I obviously really enjoyed this, and I’m very happy to learn that Netflix has already renewed the series. It’s especially enjoyable to longtime series fans, but even Castlevania newcomers will find something to like here. (Do be warned, though, if violence isn’t your thing: it’s quite gory.)

I’m sorry I’ve been away for so long again. Life, etc. I’m hopeful that I’ll be more active on here in the weeks ahead. Meanwhile, if you’re still here, drop me some love in the comments and let me know how’s things.

One thought on ““Castlevania” Season 1”