What does it take to scare us?

Nothing scares me anymore.

Let me qualify that: horror generally doesn’t scare me anymore. The last time I clearly remember being creeped out by a horror film was when I saw the original Ringu and its American remake, which would have been in 2002 or 2003, I think.

When I talk about being scared by horror, there’s something very specific I have in mind. I really love the feeling of lingering dread that certain kinds of supernatural horror can evoke. It’s often tied very closely to setting, sometimes even more than to the narrative itself: it’s a river, say, with stone lanterns flickering on the shore and fireflies drifting across the water, with willows bending down as if to drink and a dark shape flitting behind the trees. There’s often beauty in such scenes, and this beauty heightens the sense of wrongness when you notice the shape getting closer, or the darkness spreading, or whatever.

This isn’t just shock or disgust: this is a quieter and deeper feeling, one that follows me out of fiction into the real world. When a film (or book or game or whatever) succeeds on this level, I suddenly feel like that scene is one I could walk into, or that that dark shape flitting behind the trees on the screen may also be flitting behind the trees outside my window. But nothing seems to evoke this feeling in me anymore.

I suppose in the years of horror since those heady days of yore there have been a few moments of real fear. One recent(ish) standout was Rec, in the final few minutes with that hammer-wielding abomination. Imagine if you were looking down a darkened hallway and saw this: 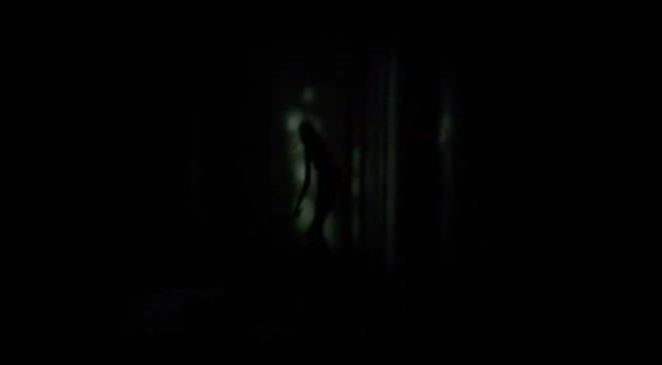 But really, as I write this I can’t think of any other books or films in the intervening years that really managed to creep me out on the same level. (Undoubtedly I’ll think of something that did as soon as I post this, but I’m blanking just now.)

The exception, predictably, is games. Horror games, by putting you in the game world, seem to be particularly adept at also putting the game world into, er, the real world. Because you’re participating in the story, you’re automatically more invested in it. Your decisions spell life or death for the character you control, which adds a certain level of stress; simultaneously, you experience the game world as the characters do, further eroding the distinction between game and reality (on a perceptual level, at least). And, as will come as no surprise to readers of this blog, the games that I feel have most effectively managed this are the Fatal Frame series.

Film and literary fiction seldom achieve this for me, at least now that I’m a jaded horror veteran. Gothic fiction comes closest, with its heavy emphasis on place (and my favorite works of horror are typically self-consciously part of the Gothic tradition). But I sit through horror films now and roll my eyes at “scares” that make other viewers scream.

This is not to say I’m some kind of unscareable tough-guy superhero. If a psychopath with an axe crashed through my window some night, my inevitable first response would be a Victorian Era hand-to-the-forehead fainting spell. But jump scares in horror are pathetic and lazy (and as a horror audience you should be primed to expect them, you ninnies).

I’m also not interested in the fear that comes from the threat of physical violence. I like supernatural horror because it forces a confrontation with things that most of us don’t have an opportunity to interact with in our daily lives. If I wanted to be afraid of knives and guns and mutilations all I’d need to do would be to turn on cable news. That stuff is out there, all the time, waiting to happen. I don’t need a reminder of it.

Again, I’m looking for atmosphere, for that chilling feeling of an unseen, inhuman presence lurking in otherwise unremarkable places. Plenty of contemporary horror films try to generate this kind of fear. The Babadook, It Follows, and all of Wan & Co.’s supernatural efforts aim for something like the atmosphere of dread I’m talking about here. For me, though, none of them work. They fall prey to bad writing or lazy scare tactics and fail to create a convincing world.

So I turn to you, dear readers, for insight. This is a terribly cliched thing to ask, but what aspects of supernatural horror do you find frightening? Why? And why do you like experiencing that kind of fear? (I assume you do, if you call yourself a horror fan–though maybe I’m wrong.) And what films, books, games and other media evoke this feeling in you? Leave your answer in the comments, or better yet, write your own blog posts in response and I’ll link to them.

7 thoughts on “What does it take to scare us?”