Frequently when I watch horror  films, I find myself complaining that they feel more like an extended episode of a television show than a proper feature film. I hate it when I fall back on formulae like this, and try to avoid it as much as possible (with limited success). But the truth is, some films–a lot, in horror–are too smooth, too sound-bytey, too abrupt, and too dialogue-driven to really feel like films.

The Shrine starts off fairly well. There’s a cheesy human sacrifice scene right at the opening, but then we get to the ultra-modern world of the protagonist, Carmen (Cindy Sampson). Carmen is a journalist with a bit of a nose for trouble, kind of like Rachel from The Ring but with less charisma. She catches wind of an American tourist who went missing in rural Poland, and she ropes her intern Sarah and her boyfriend Marcus (who is also a photographer) into flying out to try to track the guy down.

So you’ve got these three Americans tramping around a Polish village, snapping photos and being soooo American–of course the local cult  is gonna get pissed and, you know, try to ritualistically murder them. That’s on the front cover of Lonely Planet guides: “Don’t be a jerk to the locals or you’ll be sacrificed.” I think.

This is when things really start to feel televisiony. The film is clearly shot in a park or something near the studio, which is fine in principal, but it all feels staged. The effects, like the spooky mist that won’t dissipate and just hovers in one spot in the woods, are not convincing, and the statue that cries blood (you can see it on the movie poster up there) is equally underwhelming. None of this is outright bad, it’s just… meh.

Our intrepid adventurers see some spooky stuff in the fog, and they run afoul of the local culty types, and then, predictably, bad stuff happens. There’s a bloody sacrifice scene that clashes with the whole tone of things up to now (the one at the beginning cut away before the actual, uh, piercing occurred). Then we get some really original Evil Dead-caliber demon costumes, which are good for nostalgia if nothing else. It’s all just sorta half-baked. There’s also a wholly unnecessary shot of a disemboweled kid, which is a sentence I hoped I’d never type. It’s only made worse, if such a thing is possible, by the low-quality gore effects. 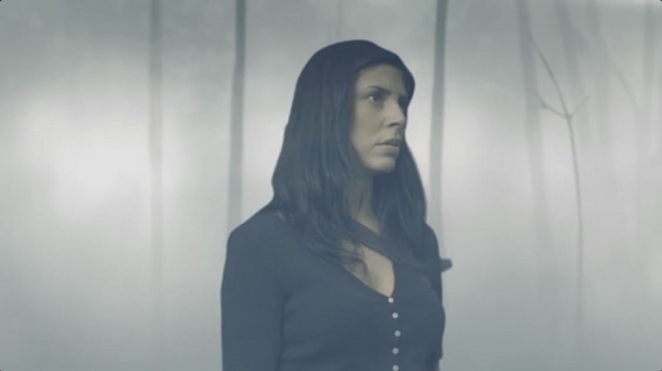 What really gets me–and where it’s the most like an episode of that CW show that I still haven’t bothered watching, except for maybe one episode like seven years ago–are the relationship dynamics. Individual episodes of TV shows don’t have to spend a huge amount of time on building up their characters; they do it a little bit here and there, over the course of a whole season,  or many seasons. Films don’t generally have that luxury. They just don’t have the time to develop a complex relationship that spans months or even years (both in the narrative and in real-time). But The Shrine, for whatever reason, takes it for granted that we buy its characters’ actions and motivations, that they have shown themselves to be sufficiently the way they are early on that their subsequent decisions and behaviors make sense to the audience.

I was ready to commend the film for its strong female lead, but then when Carmen finally had to admit that her quest for a good story was a terrible idea and this mess was all her fault, she did the stereotypical thing and started crying. Thank god Marcus was there to hug the tears away. God. Don’t worry, guys, she’s not really the bruiser you thought she was. Nothing threatening here. She does knock a guy out with a 2×4 about thirty seconds after that, but the damage is done. After that there are a lot of long stare-downs where the characters could have tried to defend themselves, but opted instead to shiver and sob in that maddening way that horror movie characters, especially women, are often made to do.

There’s also no reason for this to be in Poland. Just saying.

The one thing I liked was that the stupid “heroes” are actually walking into the middle of an ongoing conflict, and that the real evil isn’t what they thought. (Here come some spoilers.) The cultists are actually protecting the world,  I guess, from the evil statue, which causes anybody who sees it to become possessed by a demon. So yeah, they brutally sacrifice people, but they only sacrifice people who’ve seen it, and it’s for their own good. So that is sort of cool, conceptually, but it just falls apart completely, so that by the time you realize this, you don’t care anymore.